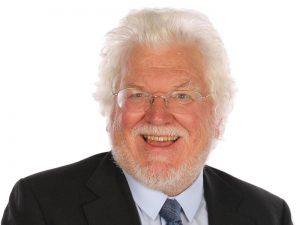 When  invited to become our Patron, Neil replied, “I would be honoured to accept the role of Patron of Plymouth Philharmonic Choir, as I have been impressed by the choir’s recent performances. In a day and age when it is difficult to find both the singers and the finances for a large amateur choir the PPC has shown it can be done – and done wonderfully.

“The performances that you have given reveal that the choir is in very fine fettle. I am pleased to be able to have such a relationship with it. I wish you all success in your forthcoming year, in which you will, be celebrating your 50th anniversary!

Neil Jenkins, the internationally known tenor, conductor and music editor, was a Chorister at Westminster Abbey, and a Choral Scholar at King’s College Cambridge. Whilst there he was the first tenor in the renowned vocal group ‘The Kings Singers’, and sang in the first concerts given by John Eliot Gardiner’s Monteverdi Choir and David Atherton’s London Sinfonietta. He subsequently studied in the Opera School at the RCM where he formed the Kensington Consort with, among others, Sir Thomas Allen and Brian Kay. He made his debut in 1967 in a recital at the Purcell Room with Roger Vignoles, and sang and recorded with the Deller Consort, under the direction of Alfred Deller, for ten years, whilst establishing himself as an opera singer at Sir Roger Norrington’s  Kent Opera. In the 1970s he was appointed as an RCM singing professor by Sir David Willcocks, for whom he became a regular soloist with the Bach Choir, especially in the Bach Passions.

He has carved out a unique career, being equally at home as an Operatic, Oratorio and Recital singer; and combining this with an increasingly important role as a musicologist. In 2003 he was appointed to a Cambridge Fellowship to enable him to write a book about Handel’s favourite English tenor: John Beard. Neil has translated and edited Haydn’s The Creation, The Seasons  and The Seven Last Words  for Barn End Press. He has produced several song albums for OUP and Kevin Mayhew Ltd.

He has recorded under such eminent batons as those of Bernstein, Britten, Marriner, Mackerras, Chailly, Nagano, Andrew Davis, Haitink, Norrington, Parrott, Gardiner and Hickox. He is also known for his performances of contemporary music, where he has been directed by Rattle, Henze, Oramo, Atherton, Penderecki, Lutoslawski, Jac van Steen, Boulez and André Previn. Neil has sung with all of Britain’s leading opera companies. Recent performances have taken him to New York, Chicago, Berlin, Paris, Lyon, Amsterdam, Geneva, Santiago, Dublin, Belfast and Tel Aviv. He appeared as ‘Arnalta’ in Monteverdi’s The Coronation of Poppea with WNO and on television, and repeated the role in 2006 at Buxton and Aldeburgh. Between September 2006 and February 2007 he managed to combine the role of ‘Irus’ in The Return of Ulysses for WNO with a concurrent production of Hansel and Gretel, as the ‘Witch’, for OTC Ireland. His performances in Kent Opera’s King Priam and Glyndebourne Festival’s Lulu and Higglety Pigglety Pop are available on video. He joined WNO once more in 2008 for a new production of Verdi’s Falstaff starring Bryn Terfel which was televised and broadcast.

In 2004 Neil was honoured by the Worshipful Company of Musicians with the presentation of the ‘Sir Charles Santley Memorial Award’ for his achievements in his singing career, and his labours in producing new scholarly Bach editions for the Novello Choral Series. Neil is President of the Haywards Heath Music Club, the Shoreham Oratorio Choir, the Grange Choral Society of Bournemouth, Basildon Choral Society and Kent Chorus; Vice-President of the Brighton Competitive Music Festival and the Huntingdon Philharmonic Society; and is Patron of the Goldsmith’s Choral Union and New Sussex Opera.

The year 2007 marked the 40th anniversary of Neil’s London debut, and he celebrated this in November at a special concert with his large choir, the Sussex Chorus – based in mid-Sussex – which he conducted from 2002 to 2014.

In 2017 he celebrated his 50th anniversary as a professional with several song recitals and performances of his lecture-recital about the Handellian tenor John Beard, as well as curating a six-month long exhibition about the singer at the Handel House museum in Brook Street, London.