About the Choir50 years of history

The Plymouth Philharmonic Choir was formed in 1970 and grew out of the Plymouth Choral Society (see below). Now, with about 160 members, it is one of the largest choral societies in the South West of England. The Choir is made up of singers from across the community, irrespective of age, race, religion and social background.

Plymouth Philharmonic Choir performs three large-scale classical choral concerts a year, usually accompanied by a full symphony orchestra. Concerts also feature leading soloists which have included Catherine Hamilton, Sir Thomas Allen, Darren Jeffery and Neil Jenkins. Our repertoire enables us to include younger voices from local schools when singing suitable works, and we appreciate the tremendous support we receive from the professional musicians who join us.

Most summers a section of the choir visits other parts of the UK or Northern Europe. In recent years they have performed in Ghent, Bruges, Cambridge, Ely Cathedral, Dublin, Amsterdam and at Notre Dame Cathedral and Versailles in Paris. The choir recently visited Brittany once more and has also sung in Liverpool at the Metropolitan Cathedral and in other UK cities. 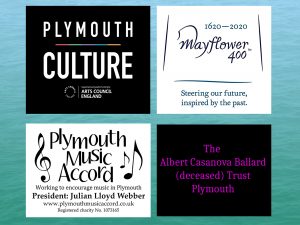 Plymouth Philharmonic Choir is a registered charity. Like most choirs we receive support, financial and otherwise, from charitable trusts and other supporters.

A SHORT HISTORY OF THE PLYMOUTH CHORAL SOCIETY (written in 1968)

In 1945, an augmented Mutley Baptist Church Choir sang a few times together. They liked this so much, that they decided it would be a good thing to sing together permanently, and so in July, 1947, the Mutley Choral Society was born. It was founded, led and inspired by William Mullineaux L.R.A.M, A.T.C.L.

The first Concert of this new Society was performed on January 21st, 1948 In the Central Hall, Plymouth. It was a Concert Version of Bizet’s Carmen, with Valetta Iacopi and Frederick Harvey as soloists.  At that time and for about ten years after, most of the performances were Concert Versions of Opera, and the Society employed professional singers from London including Marion Studholme, John Kentish and George James from Sadlers Wells, Nancy Thomas, Elsie Morison, Joan Sutherland, Constance Shacklock and many others.

At the Fourth Annual General Meeting on September 27th, 1951, the following motion was put forward:- “That the name of this Society be changed to read ‘Plymouth Choral Society’, and on October 4th, 1951, there was an overwhelming majority in favour of the motion.

The first Chairman of the Society was Mr. Robert Campbell, and the first Secretary Mr. Clifford Stroud. The Musical Director, William Mullineaux, who had been the inspiration of the Choir since its inception, was forced to resign through business reasons in 1958. We were then extremely fortunate in obtaining the services of Mr. Cyril Gell, who, amongst other things, had deputised for Leslie Woodgate in conducting the B.B.C. Men’s Chorus, and had been concerned with the B.B.C. programmer “Friday Night is music Night”. He was our Musical Director for two years, and under his baton we performed “The Messiah” in the rebuilt Plymouth Guildhall, under the auspices of the Corporation and in aid of the Lord Mayor’s Christmas Fund.

Unfortunately for us, in the summer of 1960, Cyril Gell was offered a post at the Guildhall School of Music, and so returned to London.

This time our new Conductor was the teacher of Music at Plympton Grammar School, Mr. Guy Wright. He was well known in the musical world having worked with Antony Hopkins, Fritz Spiegl and many more. Under his direction the choir started to perform more modern works, together with Bach, Brahms, Mendelssohn, etc.  We studied Britten’s “Rejoice in the Lamb”, which we performed twice in St. Andrew’s Church. Another very modern work which we performed in the Athenaeum Theatre, was based on the limerick – “The Young Man of Devizes”, and was written by Hartley :

There was a young man of Devizes,
Whose ears were of different sizes.
The one that was small,
Was no use at all,
And the other won several prizes.

This had to be sung as though it was an extremely serious piece of music, and I think that this was the most difficult thing that the choir have ever had to do!

In May, 1964, Guy Wright met an untimely death, which was a great shock to the Society. But, once again, we were very fortunate in the choice of a new Musical Director. He was, and still is, the Director of Music at Kelly College, Mr. Keith Warner. M.A., F.R.C.O., L.R.A.M., A.R.C.M. Under his baton, we have continued to explore the territory of modern composers, among them Vaughan Williams, Britten, Hubert Parry, Ireland, Raymond Warren to name just a few. But even so, we have not neglected the past masters, such as Bach, Brahms, Handel, Berlioz, Faure and so on.

The high spot of recent years has been the Festival Performance of Bach’s Passion according to St. John, which we performed with the Plymouth Madrigal Society on Friday, June 17th, 1966. This was part of the Plymouth Festival of the Arts and was an outstanding success under the skill and directorship of the Patron of our Society, Peter Gellhorn. We were accompanied by the London Mozart Orchestra, and the soloists were Elizabeth Simon, Pamela Bowden, Gerald English, John Carol Case, Peter Bamber and Richard Standen.

We have now reached our 21st season and it is our hope that will continue to make music and give enjoyment for many years to come.