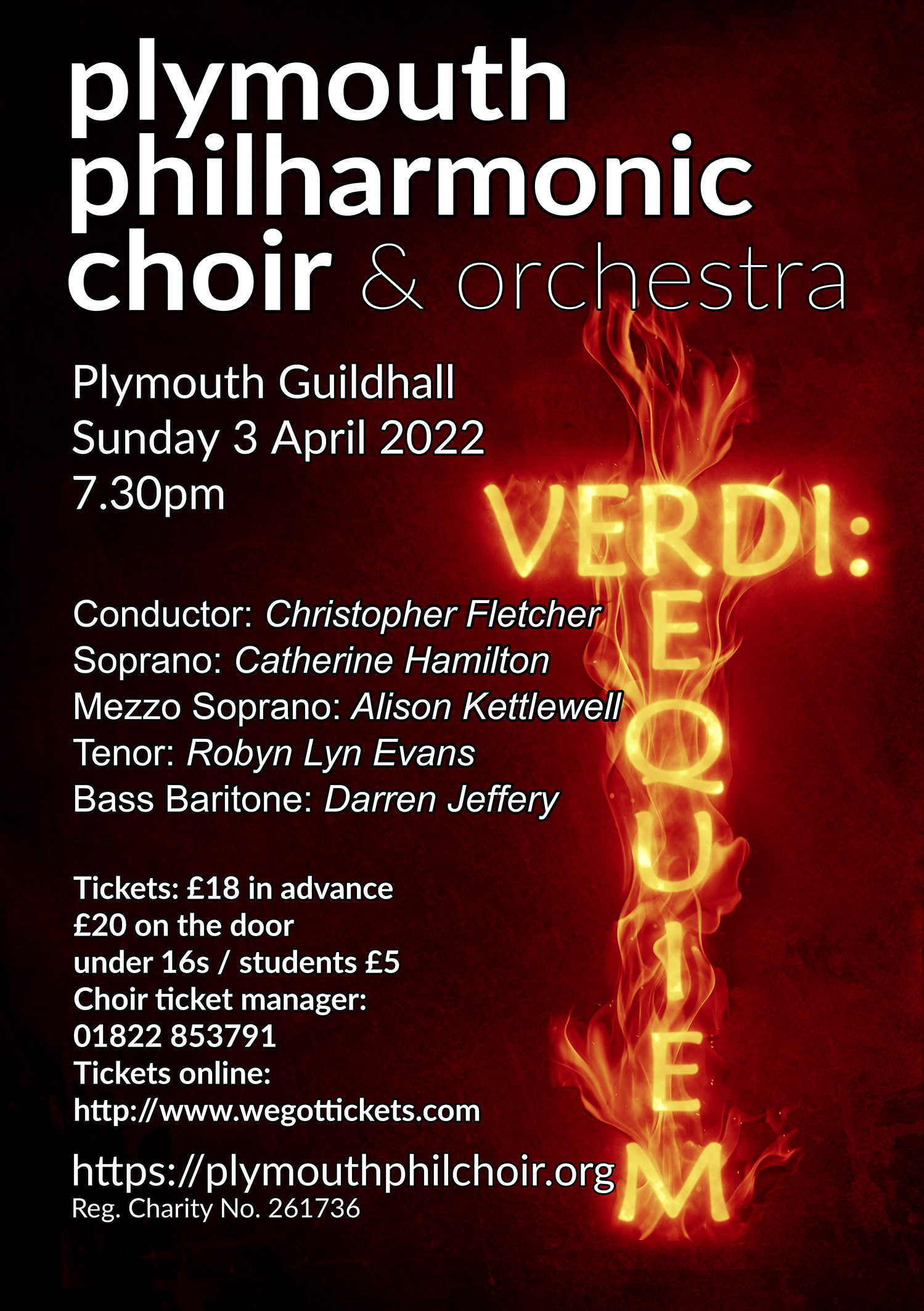 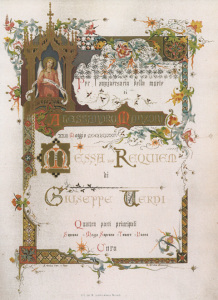 While Giuseppe Verdi is perhaps known most widely for his operatic masterpieces, it would be foolhardy to hail the Verdi Requiem anything other than a masterpiece. Verdi’s Requiem is the composer’s only large-scale work not written for the stage, and it marked a transitory point in Verdi’s life—from the heyday of one wildly successful opera after another into the relatively quiet, twilight years of his older age.

While Verdi officially began working on his Requiem in 1873, a small portion of it had already been composed back in 1868. Operatic great Gioacchino Rossini had just passed away and Verdi took it upon himself to commission a collaborative requiem to honour the composer’s memory. He began the process by providing a Libera me (Deliver me) to the effort. A year later, the Messa per Rossini was complete, with thirteen composers having contributed their work, squabbling and backstabbing all the while. Despite the fact that the composers’ lack of camaraderie meant the piece was ultimately poorly put together, the premier performance was scheduled for the one year anniversary of Rossini’s death. For one reason or another, for better or for worse, the premiere was cancelled and the piece was all but forgotten. More than one hundred years later, in 1988, the Messa per Rossini finally got its moment in the spotlight. Of the thirteen contributing composers, the only familiar name on the programme was Giuseppe Verdi’s. 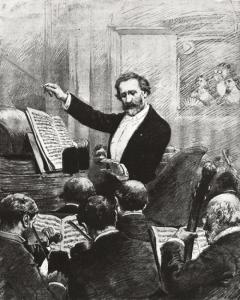 the fact that the mass for Rossini had been all for naught—musically and socially—Verdi kept returning to his Libera me, convinced that it could be put to good use somehow. It took the death of another Italian artistic fixture in 1873 to make Verdi see that what he was really vying for was a requiem. A noted poet, nationalist novelist, and personal hero of Verdi’s, Alessandro Manzoni had just, upon hearing of his eldest son’s death, fallen and died on the spot. Verdi immediately recovered the mouldering Libera me from his stacks and breathed new life into it with a revision that inspired and later found a home within the pages of his newly conceived Requiem.

Verdi set to work almost immediately on his Requiem, taking his work to Paris just a month after Manzoni’s death. By May of 1874—the first anniversary of Manzoni’s death—the Verdi Requiem was complete and ready to premiere. The piece was debuted most reverently on May 22, 1874 in the cathedral of Saint Mark in Milan. Due to papal convention, Verdi had to convince the Archbishop to allow the female half of the chorus to perform in the cathedral. At the Archbishop’s insistence, the women were made to wear mourning veils and were obscured by screens. Applause in the cathedral was strictly forbidden, so the public’s reaction to the Verdi Requiem was a bit of a mystery until a few days later when the piece was performed at Verdi’s old stomping grounds, the La Scala opera house. This time 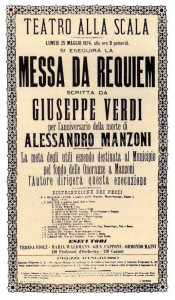 , there was no doubt as to whether or not the audience appreciated this new side of Verdi. There wasn’t an empty seat in the house, and as the final strains of the Libera me faded away, thunderous applause took over. The Verdi Requiem met with continued success on a long European tour, with one of the pinnacle performances taking place in Albert Hall, exactly one year after the premier of the piece. For this concert, Verdi himself led a chorus of over a thousand and a 140-piece orchestra. While the Verdi Requiem was hailed by critics as the greatest church music to have been written since Mozart, it was also met with disdain by a surprisingly large number of churchgoers. It was this minority who refused to recognize the greatness of the Requiem owing to the fact that Verdi was a suspected agnostic, and they felt that an agnostic should not have the right to compose religious music. They were also a bit put off by the fact that the Requiem included some of the loudest un-amplified music in all of musical history, with the brass section instructed at points to play fortissimo-issimo-issimo—a noise level not exactly welcome by the church. Another famous naysayer of Verdi’s Requiem was Verdi’s German counterpart, Richard Wagner. Wagner and Verdi had long been arch rivals, despite the fact that they’d never met one another. Upon hearing a performance of the Requiem, it is reported that Wagner sat for a moment and finally said, “It is better to say nothing at all.”

These negative attitudes notwithstanding, the Requiem has fascinated and moved liste 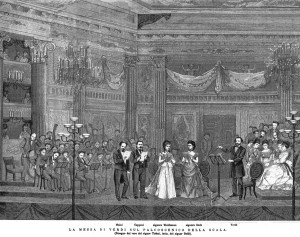 ners and musicologists alike for years and shows no signs of doing anything otherwise for many years to come. So powerful was the Requiem that it was performed sixteen times by prisoners at the Terezin concentration camp during World War II. Led by interned conductor Raphael Schächter, a chorus of fellow imprisoned artists performed the piece, to the sadistic delight of the Nazis who considered it a great insult to force Jews to perform a piece with Roman Catholic roots. The prisoners, however, drew strength from their rehearsals and performances, and while the Nazis joked that they were “singing their own requiem,” the performers felt their voices had been returned to them, making the final Libera me something of an anthem.

Musicologically speaking, there are few notable differences between the layout of Verdi’s Requiem and that of the typical requiem mass. Verdi did leave out the oft-used Gloria, a gesture that may or may not have been a reflection on his supposed agnosticism. The Verdi Requiem consists of the Introit & Kyrie, the ten-part Dies irae (“Day of Wrath”) sequence, the Offertory, the Sanctus, the Agnus Dei, the Communion and, of course, the Libera me sequence. The music of the Requiem is characterized by wild undulations. The composer moves from sparse, otherworldly vocals to brass-heavy inescapable brimstone and fire, and back again. Throughout, he uses the terrifying theme of the Dies irae to remind listeners of their inevitable mortality and judgment, all the while relying on wavering chromaticism to leave a sense of the composer’s own unresolved spiritual questions. While the Verdi Requiem has its unmistakably operatic moments, it is not, as one disgruntled critic once said, “an opera in ecclesiastical robes.” It is a work of far-reaching spiritual and emotional magnitude that at once pushed the religious music envelope and gave new meaning to the phrase “to each his own,” as evidenced by its cross-denominational/cross-cultural longevity and popularity.