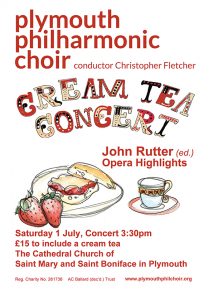 OUR NEXT CONCERT
Cream Tea Concert 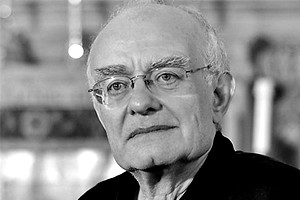 John Rutter’s popular music embraces hymn settings for choirs, Christmas carols, and epic choral works such as the Gloria and the Requiem. He’s also written orchestral and instrumental pieces and TV soundtracks.
Born on 24 September 1945 in London, John Rutter was educated at Highgate School, where a fellow pupil was the future composer John Tavener. At school, Rutter already loved to sing and compose.
When Rutter began his degree at Clare College, Cambridge, he was already an experienced composer. At 18 he wrote his famous Shepherd’s Pipe Carol. David Willcocks, who was running the music department at King’s College, looked over Rutter’s manuscripts and said, “Would you be interested in seeing some of these published?” Rutter said, “I was truly gobsmacked.”

In 1974, Rutter visited Nebraska, USA, to conduct the premiere of his cantata Gloria.  Between 1975 and 1979 he returned to Clare College where, as director of music, he made a tremendous impact, raising choral standards to the level of the more famous King’s. Yet by now his own music had really begun to take off and he was also increasingly in demand as a conductor.

Rutter’s music is eclectic, showing the influences of the French and English choral traditions of the early 20th century, as well as of light music and American classic songwriting. Almost every choral anthem and hymn that he writes, in addition to the standard piano or organ accompaniment, has a subsequent orchestral accompaniment as well, using varied instrumentation.

When composing, Rutter will often work from mid-morning until midnight with only a break for dinner. He thrives on discipline and feels that the most vital aspect of any new piece is to come up with a first-rate idea, which then becomes a vital springboard for the piece as a whole. He prefers to make revisions and corrections as he goes along rather than revisit and make any changes after a piece has appeared in print.

Nowadays, John Rutter is often invited to compose music for special occasions, most memorably for the wedding of Prince William and Catherine Middleton, which featured his enraptured anthem, This Is The Day.

In 1996 the Archbishop of Canterbury conferred a Lambeth Doctorate of Music upon John Rutter in recognition of his contribution to church music. He was also honoured in the 2007 Queen’s New Year Honours List, receiving a CBE for services to music.