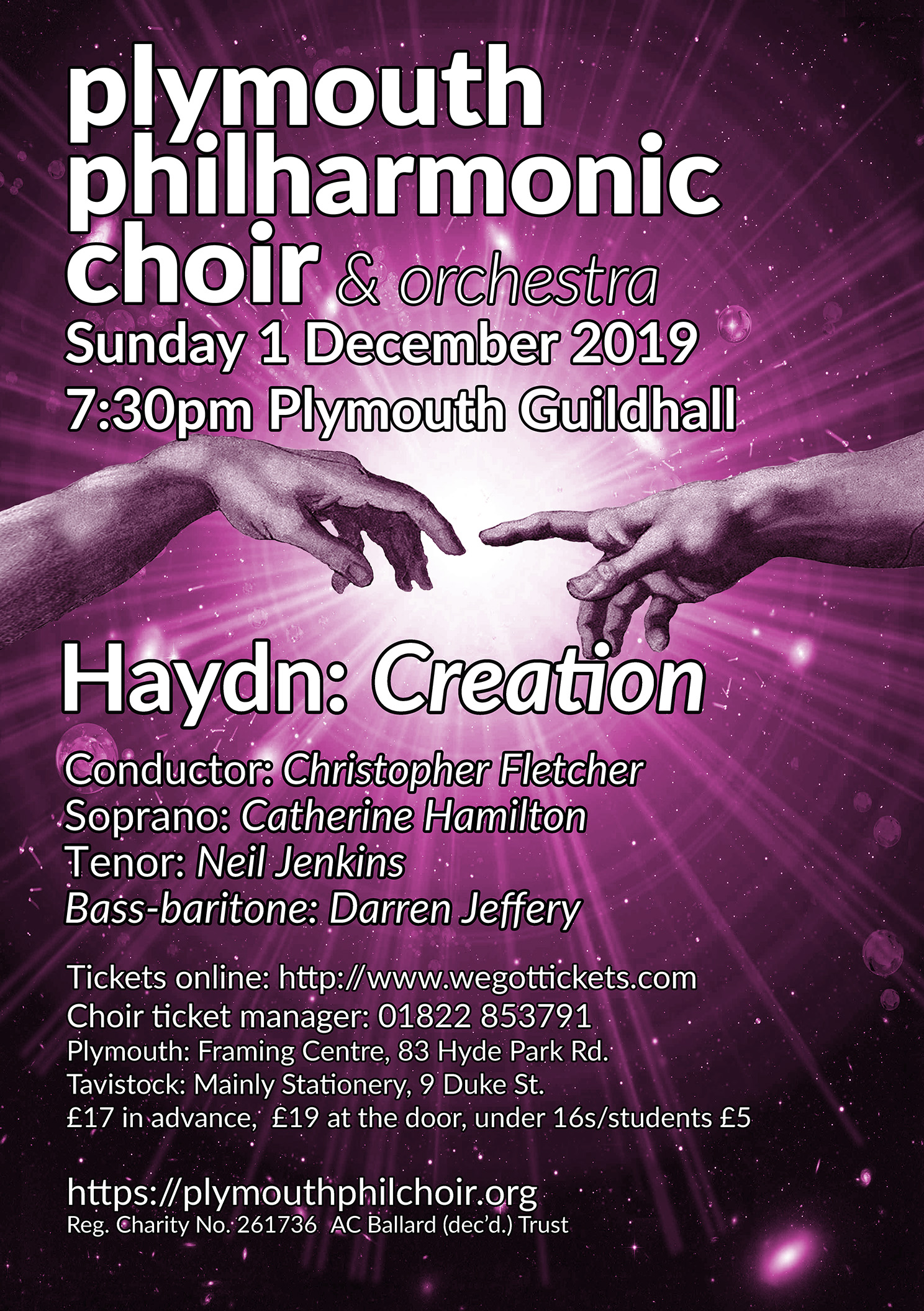 OUR NEXT CONCERT Sunday 1 December

In this piece, the three soloists represent the archangels Gabriel (soprano), Uriel (tenor) and Raphael (bass), with the chorus fulfilling an important role portraying angels glorifying their maker. 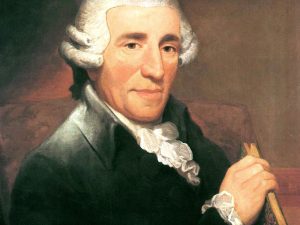 Haydn witnessed many radical changes in music during the course of his long life. He was eighteen when Bach died in 1750, not long before the close of the Baroque era, and seventy-two when Beethoven’s ‘Eroica’ Symphony was first performed in 1804, ushering in the Romantic period. Old forms of music were superseded by the symphony, sonata and string quartet, patronage moved from the church to the royal court, and public concerts were rapidly becoming immensely popular. Throughout all these changes, Haydn remained a pioneering figure. Other composers had written symphonies, sonatas and string quartets before him, but it was Haydn who first exploited the untapped potential of these forms, expanding and developing them to a hitherto unimagined degree.

The almost childlike cheerfulness of Haydn’s music, its inexhaustible inventiveness and its perfection of design conceal a considerable inner strength. This fusion of exuberance, originality, classical elegance and intellectual power explains to a large extent the compelling appeal of his music. These are the qualities that placed Haydn far and away above the level of all except Mozart amongst his contemporaries, and kept him at the forefront of music during most of the eighteenth century. No wonder he was hailed as a genius throughout Europe, admired and revered by the public and by his peers. Mozart said, ‘Haydn alone has the secret both of making me smile and of touching my innermost soul’. Even Napoleon, on capturing Vienna, immediately ordered a guard of honour to be placed round Haydn’s house.

For much of his life Haydn’s energies were devoted primarily to composing orchestral and instrumental music. The supreme choral masterpieces of his old age – The Creation, The Seasons and the six last great masses, including the well-known Nelson Mass – were all composed after 1795, the year in which he completed the last of his 104 symphonies.

The oratorio as a musical form appeared briefly in seventeenth century Italy, but was soon eclipsed by the much more popular operas. It was Handel who resurrected the oratorio from obscurity, transforming it from little more than an extended cantata into a powerful choral music-drama that was soon to dominate public music-making in eighteenth and nineteenth century England. The succession of masterpieces that Handel wrote inspired many later composers, notably Haydn and Mendelssohn. During his first visit to London, Haydn attended one of the great Handel festivals held in Westminster Abbey and was completely overwhelmed by the experience, as a result of which he resolved to write an oratorio himself that would be worthy of Handel’s supreme examples. In 1796, inspired by what he had heard whilst in London, Haydn set to work on the score, which was not completed until 1798, by which time he was sixty-six. ‘I was never so devout as during that time when I was working on The Creation,’ he observed. The work received its first public performance in 1799 and was immediately recognised as a supreme masterpiece, receiving many performances all over Europe.

In common with opera, and like most oratorios – though not Messiah – The Creation has named characters and is divided into acts and scenes. These consist of sequences of choruses, recitatives and arias. The work begins with an extended orchestral introduction, ‘Representation of Chaos.’ Parts One and Two then describe the six days of Creation, each of which follows a threefold pattern comprising biblical narrative, descriptive central section and hymn of praise. The three soloists represent the archangels Gabriel (soprano), Uriel (tenor) and Raphael (bass), with the chorus fulfilling an important role portraying angels glorifying their maker. Part Three is devoted entirely to the appearance of Adam and Eve (bass and soprano) who sing of the wonder and perfection of God’s newly created world and of their happiness together.  Soloists and choir combine for the final uplifting chorus of praise.

The Creation represents a considerable dramatic development over its Handelian predecessors. Haydn’s bold use of orchestral colour, his adventurous harmony, exceptional rhythmic and melodic inventiveness, and the work’s strong overall unity bring the subject to life with an almost operatic vividness and power. The opening is a good illustration of Haydn’s innovative approach. The extended orchestral introduction, itself a departure from the conventional overture, is entitled ‘Representation of Chaos’ and immediately arrests the listener’s attention with its shifting, ambiguous harmonies on muted strings, brass and timpani. In the ensuing recitative Raphael tells us that ‘the earth was without form, and void’ and this is reflected in the sparse emptiness of the orchestral accompaniment. The choir continues in a mood of hushed stillness, until ‘and there was light’, at which point there is a sudden, massive fortissimo chord of C major from the now unmuted full orchestra. Even after two hundred years the effect is still immensely powerful. It was evidently totally overwhelming at the time, judging by the following account from one of Haydn’s friends.  ‘. . . and at that moment when light broke out for the first time, one would have said that rays darted from the composer’s burning eyes.  The enchantment of the electrified Viennese was so general that the orchestra could not proceed for some minutes,’ he wrote.

This is perhaps the most startling dramatic gesture of the whole work, but there are plenty of other equally effective instances of musical word-painting, such as the storm scenes, the wonderful sunrise music and the colourful depiction of various animals and birds. It is also worth drawing attention to Haydn’s musical characterisation. For the angels he adopts a somewhat florid, lofty style, whilst for Adam and Eve the writing is simpler and more folk-like. In fact the whole work sparkles with the vitality and unfailing inspiration so characteristic of this remarkable composer, who was still experimenting and still surprising his delighted audiences right up to the end of his life.